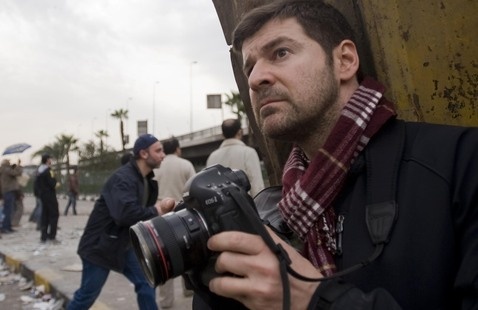 Join the Greg Museum of Art & Design for a screening of HONDROS , an American documentary film about war photographer Chris Hondros, whose work is currently on display at the Gregg. That exhibition — Conflict Photography by Chris Hondros — will remain on view at the Gregg through Jan. 9, 2022.

An NC State graduate and two-time Pulitzer Prize finalist, Hondros traveled to the world’s major conflict zones of the last two decades, including Kosovo, Angola, Sierra Leone, Afghanistan, Kashmir, the West Bank, Iraq and Liberia. He was killed April 20, 2011, in a mortar attack by government forces while photographing the conflict in Misrata, Libya.

HONDROS premiered at the Tribeca Film Festival, where it won the Audience Award, Documentary First Place. Filmmaker Greg Campbell will introduce the film at the Gregg Museum on the evening of the screening.