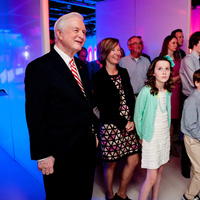 Gubernatorial Leadership in the Face of Disaster

James B. Hunt Jr. is a former four-term North Carolina governor who led the disaster recovery efforts following two of the state’s worst disasters — hurricanes Fran (1996) and Floyd (1999).  Hunt will discuss the role of gubernatorial leadership in disasters, including: