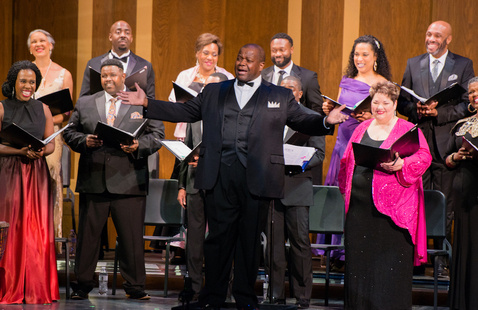 https://live.arts.ncsu.edu/spring-2022/american-spiritual-ensemble/
View map All tickets are general admission: $30 for the public, $8 for NC State students, $15 NC State faculty and staff Add to calendar

In one of the nation’s largest cathedrals, let the soul-stirring voices of the American Spiritual Ensemble move you as they evoke the power, faith and beauty of the American Negro spiritual.

Founded in 1995 by Everett McCorvey, the American Spiritual Ensemble has a mission to preserve and continue the tradition of storytelling through the performance and preservation of the American Negro spiritual. Performing these spirituals serves as a tribute to the many lives lost or destroyed during slavery in the United States.

These songs, a combination of African, American and European traditions, create a new type of melody in which a sense of identification was created within the enslaved community. These songs now stand as a testament of the strength found through faith during times of hardship as well as a unifying force among all people.

Arts and Culture Social and Entertainment Diversity and Inclusion

All tickets are general admission: $30 for the public, $8 for NC State students, $15 NC State faculty and staff